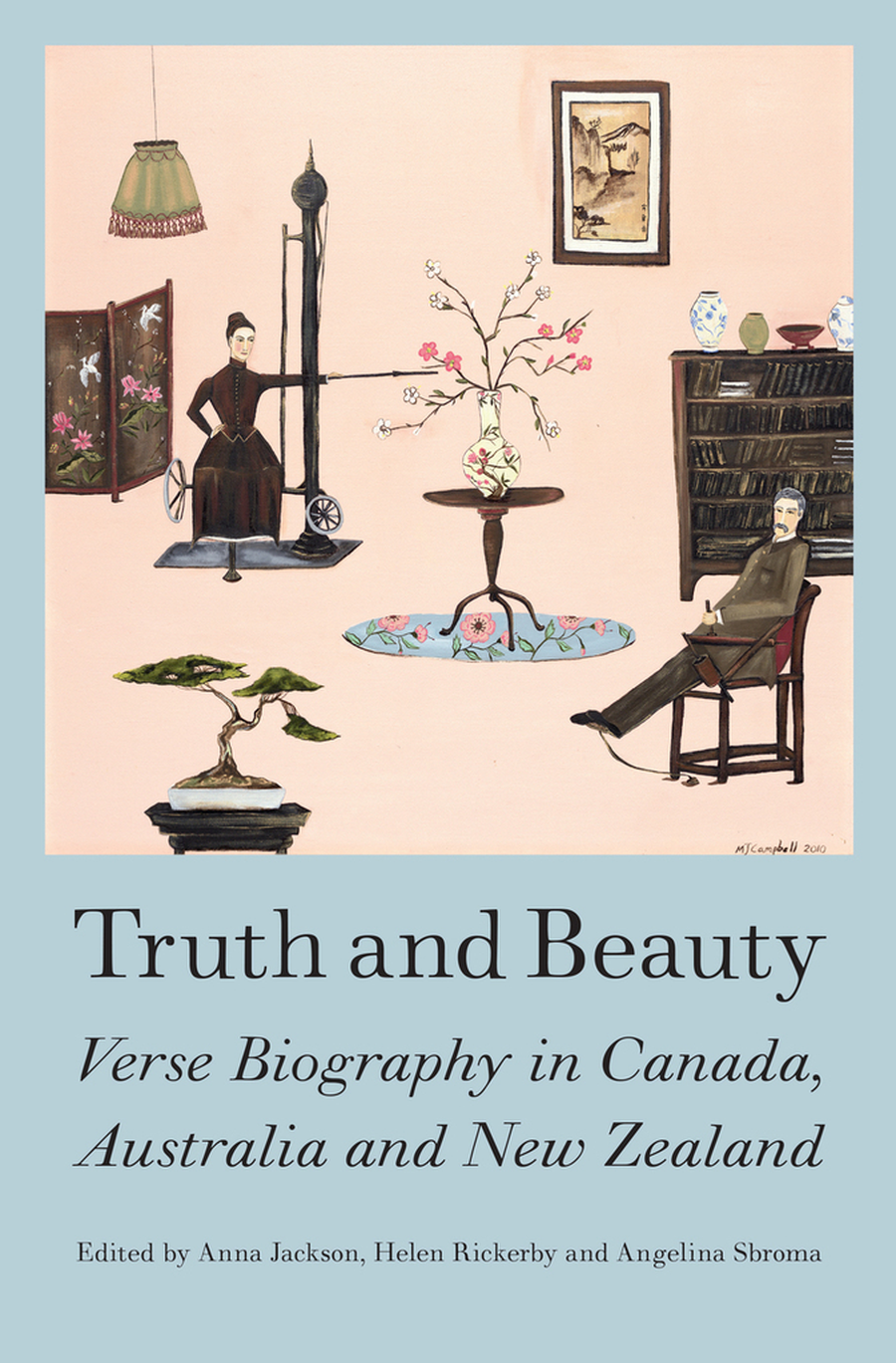 Review of Truth and Beauty: Verse Biography in Canada, Australia, and New Zealand

Verse Biography and the Loneliness of the Single-Author Study

For scholars of biography and the long poem, Anna Jackson’s introduction to Truth and Beauty is necessary reading. Jackson, defining verse biography as “a collection of poetry that tells the life story of a historical person,” identifies it as a genre that stretches at least as far back as the Epic of Gilgamesh and that has enjoyed a boom in recent decades (8). As Jackson considers what distinguishes it from its prose counterpart, she notes various characteristics of the lyric: the way in which it allows for sudden jumps and shifts in perspective; its toleration of gaps and absences; its emphasis on individual moments and individual people’s imagined interiority. These qualities, Jackson argues, lead to verse biographies frequently offering portraits that are both uniquely intimate and pointedly incomplete, refusing to let readers think they’ve been granted the last word on the biographical subject. Jackson also sees the lyric element of verse biography as responsible for the tendency of poet-biographers to blur the boundaries between themselves and their subjects, often self-reflexively.

After Jackson’s introduction, the first three chapters in Truth and Beauty deal with Canadian poets. In a chapter on Margaret Atwood’s The Journals of Susanna Moodie, Russell Coldicutt observes the ways in which the book’s use of collage resonates with how scholars of life writing have used the metaphors of masks and palimpsests to discuss the inflections of self-representation in biographers’ depictions of others. Joan Fleming’s chapter addresses how Anne Carson’s work emphasizes her biographical subjects’ unknowability, as in her translations of Sappho, which repudiate a “desire to locate the definitive Sappho in the afterlife of her texts” (85). And Ian Rae makes a valuable contribution to scholarship on Michael Ondaatje’s The Collected Works of Billy the Kid by steering the conversation away from the book’s much-noticed evocations of photography and film. Rae points out that the book is equally involved in matters of voice, with its proliferation of speakers suggesting Ondaatje’s desire to “escape the monologic lyric” (49). As Rae considers the pointed lack of clarity regarding whether it’s Billy the Kid, Pat Garrett, or some version of Ondaatje himself speaking in various poems, he offers a fresh perspective on elements of the volume that have preoccupied critics. For instance, noting that the text is bookended by a framed white rectangle and then, at the conclusion, by a photo of Ondaatje himself dressed in a cowboy costume as a child, Rae sees the collection as “implying that the portrait of Billy/Ondaatje has taken the duration of the narrative to resolve itself in developing fluid” (60). It’s a lovely interpretive possibility.

After that, there are chapters on poetry by three Australian writers, Jordie Albiston, Jennifer Maiden, and Dorothy Porter, and on poetry by New Zealand writers Tusiata Avia, Amy Brown, Chris Orsman, and Robert Sullivan. The biographical subjects of the poems range from the explorer Robert Falcon Scott in Orsman’s South to medieval mystic Margery Kempe and indie rock musician Jeff Mangum in Brown’s The Odour of Sanctity. The standout chapter is Bridget Orr’s article on Sullivan’s Captain Cook in the Underworld and Voice Carried My Family. As Orr explores how Sullivan deploys the conventions of the oratorio and of Māori oration in the course of interrogating the fraught legacy of the explorer Captain James Cook, she also surveys the diversity of responses to Cook among Māori writers, helpfully reminding us that Sullivan’s approach isn’t the only one.

Collectively, the chapters in Truth and Beauty offer myriad insights about the verse biographies they discuss. At the same time, one is left with the impression that the book has only scratched the surface, even in terms of just the three national literatures represented. One reason for that impression is that every one of the chapters is a single-author study (with six of the ten chapters focusing on a single book). Reaching the end of the volume, one yearns for someone to follow in the path of Jackson’s introduction by taking a more synoptic view and giving readers a better sense of how much verse biographies range in their strategies, what their key similarities are, and what can be said about those similarities and differences. For instance, it’s striking that virtually all of the subjects of the poems discussed in Truth and Beauty had died before the poems were written, and none of the subjects had been known personally by the poet writing about them. Is that just a coincidence? Verse biographies about living people do get written; to give just two examples noted in Truth and Beauty itself, Carson’s Nox elegizes her brother, while Maiden has written poems about living politicians such as Hillary Clinton. Surely, producing a biography is quite different when it’s about somebody who exists for the poet only through archival traces than when it’s about someone whom the poet might meet face to face—someone who might take offense, repudiate the biography, even file a lawsuit.

Likewise, one wonders about gender. Almost all of the verse biographies discussed in Truth and Beauty involve poets writing about someone who shares their gender identification. What about verse biographies in which that isn’t the case? In those instances, does Jackson’s observation about verse biography’s tendency to blur the biographer and subject together still hold true? In Truth and Beauty, Shari Kocher does compellingly discuss Porter’s book Akhenaten, which is about the titular Egyptian pharaoh, but there’s more to be said about the implications of Porter and others writing across gender.

If such matters are to be dealt with satisfyingly, it would help for critics to break out of the single-author approach. Ideally, they’d also start to work comparatively with respect to national literatures. Jackson suggests the value of comparative work with respect to Canada, Australia, and New Zealand by noting in her introduction that Carson, for one, has been cited as an influence by writers in the other countries. But Truth and Beauty doesn’t go much further in terms of thinking across national lines, such that the choice to focus only on poets from the three countries seems somewhat arbitrary. The three are certainly joined by their shared history of British settler-colonialism and the oppression of Indigenous peoples, but this connection isn’t one that the book explores, even though Atwood’s, Ondaatje’s, and Sullivan’s poems all feature protagonists who are iconic figures in terms of colonial history. One wonders: what is there to say about Albiston’s The Hanging of Jean Lee—about the last woman to be executed in Australia, discussed in Truth and Beauty by contributor Jessica L. Wilkinson—in relation to Canadian poems such as Atwood’s “Half-Hanged Mary,” which gives voice to Mary Webster, convicted of witchcraft in Massachusetts in the 1680s, or Carolyn Smart’s “Written on the Flesh,” about serial killer Myra Hindley? How about comparing Maiden’s biographical poems dealing with political figures to George Elliott Clarke’s book Trudeau: Long March / Shining Path, which shares with Maiden’s work in whimsically dramatizing meetings between political leaders that never actually happened? It was sociologist Seymour Martin Lipset who said “Those who only know one country know no country.” The same might be said with respect to knowing poets and their work.