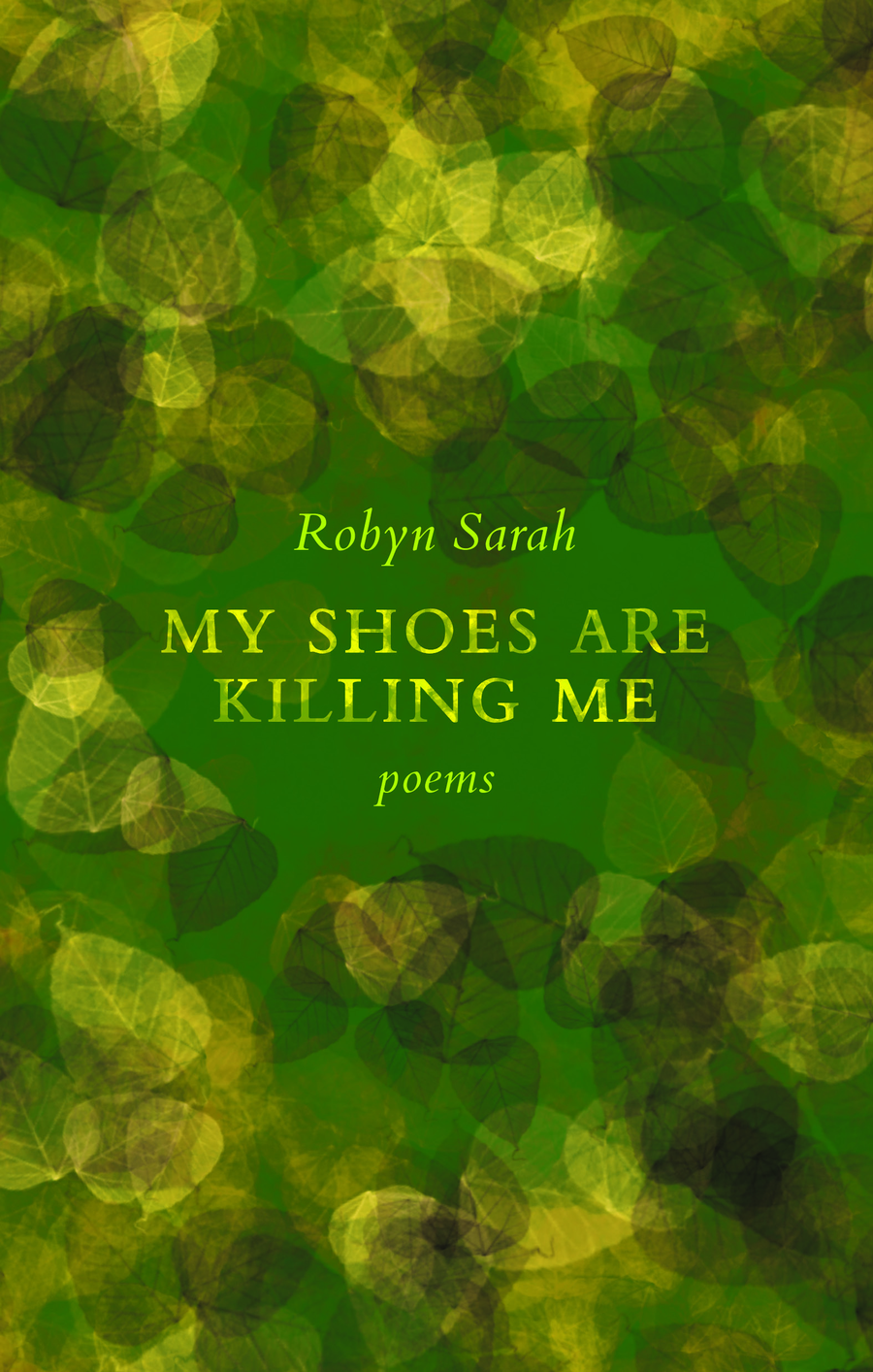 Review of Robyn Sarah's My Shoes Are Killing Me

Winner of the 2015 Governor General’s Award for Poetry in English, Robyn Sarah’s tenth poetry collection is rife with nostalgia and a sensitivity to life’s transience. The poems’ speaker has arrived at an age that brings with it a heightened sense of mortality, as well as a tendency to retrospect and to wonder what has happened to things now gone. From the crepuscular opening poem, “In the Slant Light,” it is clear that those things include opportunities; as the speaker puts it, “It is too late now for many things.” And while there are details that give glimpses of a real or fictional biography inflecting the poems—the speaker’s memory of pregnancy in “Seed” is especially powerful—Sarah tends to focus on experiences and feelings in an abstracted manner that encourages identification by readers, especially those who are likewise prone to dwell on their bright pasts and eventual demises. An effect is that at times the poems seem to speak for a generation: in particular, the baby-boomer cohort of which Sarah is a member and which, as it swells the ranks of septuagenarians, is beginning to assess its track record and prospects in earnest.

The title poem of My Shoes Are Killing Me, one of the strongest in the book, opens with a fine stanza: “It was the beginning of dwindle. / Even the ink was stingy. / The doctor was mortal.” The short, end-stopped lines perfectly complement the speaker’s insinuation that ageing can be attended by manifold kinds of congealment, while the deft recurrence of sounds in “beginning,” “dwindle,” “ink,” and “stingy”—not to mention “doctor” and “mortal”—exemplifies a musicality that distinguishes Sarah’s work. Moreover, the third line’s statement of the obvious encourages readers to mull the sentence’s figurative implications. And the lines are funny, their laconicism giving them an effectively deadpan quality. Humour features in some of the other most memorable moments in the poem, too. For instance, when the speaker recalls saying plaintively as a child, “Where is my trampoline?”and “Where is my toboggan?,” there is some mirth involved in the recognition that Sarah is alluding to Citizen Kane. At the same time, there is a pathos in her linking of the speaker and the film’s protagonist to the ubi sunt motif and a centuries-long elegiac tradition. We are reminded that loss is one of the things we never lose.

Some readers will admire My Shoes Are Killing Me for the ways in which it tackles the enduring concerns of mortality and nostalgia—what the speaker of “Squares for a Patchwork Quilt” calls “the Big Subjects.” At the same time, Sarah occasionally risks dealing with those concerns in overly familiar ways. In the prose poem “What Time Is It?,” for instance, the speaker declares: “Time picks clean the bones of the present, then like a sea catches them up and transforms them, twisting and silvering and eating away the rough edges.” Sarah would appear to be reworking the lines in The Waste Land in which readers are told of a drowned sailor: “A current under sea / picked his bones in whispers” and “Those are pearls that were his eyes.” There is something exciting in the idea that Sarah is playfully stealing from T. S. Eliot just as Eliot stole the line about the pearls from The Tempest. In doing so, she might be said to be exploring the paradox that a preoccupation with mutability is one of the things that gives poetry its lasting value. There might even be a suggestion that one poet can magically transform the words of another just as the sea transforms a corpse. But there is also a worry that the economy and mystery of Eliot’s lines are lacking in Sarah’s.

If the seeming nod to The Waste Land makes it sound as though Sarah’s work trades in modernist esotericism, it should be said that her poetry is entirely accessible even to readers who do not read much poetry. Lines such as “The doctor was mortal” demonstrate that there are complicated things going on, but Sarah avoids recherché words and phrasings with abstruse literal meanings, as if keen not to exclude or frustrate any of her audience. Such a refusal is neither condemnable nor laudable per se; what is troubling is that Sarah also refuses to make moves that would disturb her readers’ beliefs or habits of thought. The poems in My Shoes Are Killing Me are never disagreeable. They rarely venture into politicized matters. They seldom deal with things like class, sexism, race, or power. Poets are under no obligation to address such matters, but by leaving them aside, the poems in My Feet Are Killing Me end up approaching the “Big Subjects” of the lost past and the prospect of death in a highly attenuated way, one reflecting the subject-position of those who enjoy the privilege to dwell on them in poetry. As the poems repeatedly treat that subject-position as though it were the only one, they turn out to be political after all, ideological poems par excellence insofar as they neglect to challenge the social status quo, to recognize its contingencies, or to imagine that the future could improve upon the past. An emblematic assertion in this regard is offered by the speaker of “It Is Not in Great Acts,” who claims: “what we long for is with us, passing too quickly.” By insisting on the need to revel in the present, and by stressing that life is a process of continually losing what you have, the poems manifest and nurture a conservative outlook.

Meanwhile, Sarah’s preference for plain language sometimes leads to the rehearsal of clichés. In “Reading Marianne Moore on a Train between Cobourg and Kingston,” for instance, the speaker compares the snow on fields to a “threadbare cotton blanket.” If the phrase is an attempt at resurrecting a dead metaphor, the attempt itself feels threadbare. Collectively, the dead metaphors in My Feet Are Killing Me accumulate into a zombie horde: they include “battening down the hatches for winter,” “somehow we took / a wrong turn,” “The numbers don’t add up,” “The dream was rotten to the core,” “That’s the limb / I happen to be out on,” “all the bells / and whistles,” “We could not know / the brink we stood on,” “We are without a map,” “We dissolved in each other’s arms,” and “it’s all spilled milk now, no going back.” Perhaps Sarah wishes to reflect the way in which, as we age and embrace certain habitual sayings, the elasticity of our relationship to language can lessen. Perhaps she wishes us to recognize the speaker’s world-weariness in her lazy approach to language. Perhaps the speaker is trying to wring new meaning from old words. But there’s little by way of evidence in the book to support such inferences.

Sarah’s poems are often most compelling when most anecdotal, as her miniature narratives gain a parabolic quality. “Segovia,” for example, describes a group of guitarists meeting and falling into a discussion of their fingernails:

They were comparing the length

of their fingernails, they were expounding

upon the strength of fingernails,

they were trading chilling tales

Once more, the musical quality of Sarah’s work is on display. Once again, there is a comic element, augmented by the same rhyme and repetition that create the musicality. Once more, Sarah accommodates readers who are uninterested in the esoteric: the poem is delightful merely in observing the sorts of things that enthusiasts discuss when they get together. But “Segovia” equally involves Sarah once more meditating on mutability and mortality, with the fingernails’ growth signifying both the body’s self-regenerative powers and its intimate relationship to death; fingernails are, after all, made up of dead cells. The poem is also subtly metapoetic, calling attention to the body’s role in artistic creation and performance, reminding us that literally and figuratively, an artist works with death at her fingertips. In such moments, My Feet Are Killing Me puts its own finger on a key reason why the ubi sunt motif continues to thrive: we may not all have idyllic pasts about which to be nostalgic, and we may not all enjoy comfortable lives in the present or the luxury to think extensively about the inevitable end of things, but poetry brings us into a renewed awareness of ourselves as beings in time, swivel-headed creatures constantly looking forward and back. Moreover, it reassures us that for all the flux and singularity of our individual existences, we need not go through the experience without aids to understanding it. The trampolines and toboggans may be gone, but poetry persists and, with it, something of everyone.