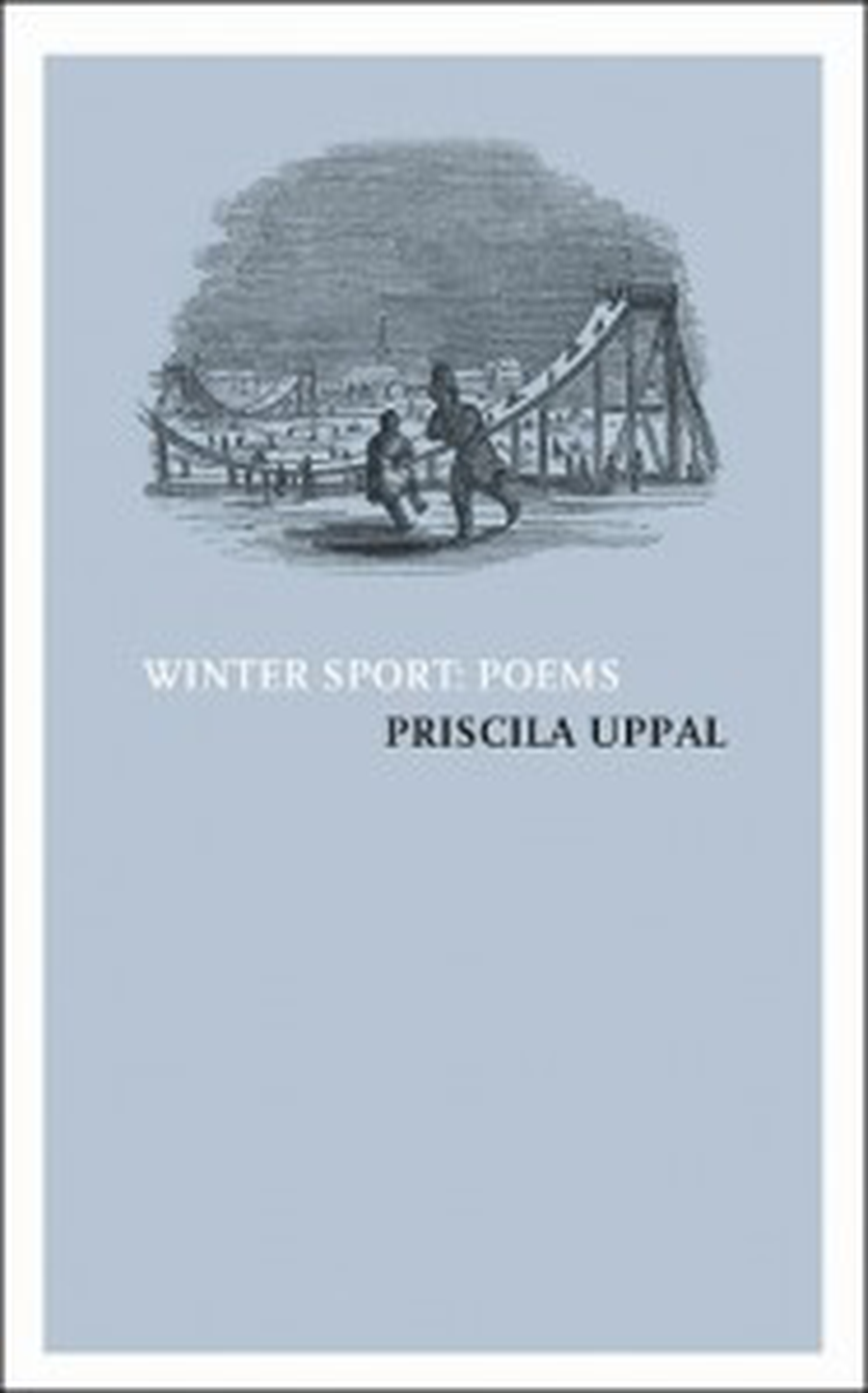 Everybody knows that for writers to neglect their bodies is the price—for some, the privilege—of literary success. Everyone also knows jocks enjoy little facility with words. Television commercials exploit this stereotype by having sports heroes either recite poetry or play to type. For instance, Wayne Gretzky once took part in a shoot for a Nike ad touting Bo Jackson’s multi-sport prowess. Gretzky was unable satisfactorily to recite his one line, “Bo knows hockey,” so in the ad that aired, he simply looks into the camera and says “No.” The word actually augments the commercial’s lyricism, as the spondaic rhyming anaphora, “Bo knows,” intoned by a series of sports heroes earlier in the ad, is ironized by Gretzky’s homophonic monosyllable. The word confirms both Gretzky’s iconic jockdom and advertising’s claim to being the mainstream poetry of postmodernity.

Working to rescue sport from such corporatized discourse and reunite literature with the kinaesthetic body, Priscila Uppal’s collection Winter Sport encourages us to think about the imbrications of language, athletics, and capitalist mass media. Those imbrications were no clearer than during the brand-saturated spectacle of the 2010 Vancouver Olympic and Paralympic Games at which Canada aimed to “Own the Podium” and Uppal served as a poet-in-residence. During her tenure, she not only wrote many of the poems included in Winter Sport but also performed them for Canadian team members and their supporters—people intimately, complicatedly familiar with corporate sponsorship and rhetoric. Accordingly, Uppal’s book is a fascinating record of an attempt to write poems for sportspeople, and not just because the attempt exhibits an impulse among contemporary poets to popularize their work. In a limited sense, to be sure, the Olympians for whom Uppal was writing epitomized a wider population divorced from poetry, yet in other ways they were strikingly not representative at all. With their extraordinary talents and capabilities, they were more like young gods waiting to be honoured, if not appeased.

Given this fact, it is unsurprising that the poems in Winter Sport are unapologetically both boosterish and accessible, exultations of competitive athletics that often make use of models Uppal’s auditors were likely to recognize. For instance, the book’s most common form is the haiku, and its most common genre is the love poem. The collection also deploys puns, repetition, and parody to draw in its audience. Indeed, one of Winter Sport’s pleasures is its sheer verbal audacity, as Uppal is unafraid to verge into goofiness for the sake of holding her audience’s ears. Consider these lines from “Canada Is the Hockey Ward: Men’s Version”:

Every Sea, brook, and mountain cheers

Turn up the Heatley:

We need to be Thorntons in their sides.

Various NHL players mentioned in the poem might have previously heard their names subjected to similar punning by Ron MacLean on Hockey Night in Canada; in fact, Uppal acknowledges MacLean at the poem’s outset. Even as she nods to television’s usurping of print in engaging people discursively with sport, she asserts her prerogative to exploit TV’s linguistic resources for her own ends.

In the same way, Uppal draws on the currency of advertising. For example, the poem “We Dream in the Language of Winter” evokes a recent MasterCard campaign, reading in its entirety:

Although the cliché about words for snow, the repeated redundancy of “different,” and the flagrant inaccuracy of the last line might be taken as shortcomings in the poem, its self-reflexive title suggests Uppal’s awareness of such language’s impoverishment. With its ledger-like numerals, the poem hints that our ways of speaking about sport have been corrupted by a corporate discourse that monetizes athletics, reduces the Olympics to a medal-count column, and makes victory all about—here, literally—the bottom line. Uppal rehearses and parodies this discourse, her title exposing it as discourse and drawing attention to our complicity in it.

To reinvigorate the “language of winter,” Uppal looks not least to the argot of athletes themselves. She finds particularly rich material in the terminology of snowboarders and skiers, which she incorporates enthusiastically. As a result, her poems limn a strange, marvellous world in which it is possible for a human being to herringbone, J-tear, goofyfoot, and eggplant. By foregrounding such words, Uppal rescues athletes from the stereotype of the inarticulate jock while reminding her audience that sport and poetry can be companionable forms of play. Likewise, her use of incantatory and onomatopoeic language has a childlike appeal, evoking the era of “Red Rover,” “Ring Around the Rosie,” and skipping-rope chants, a period of life when the body moves intuitively along with verse. In fact, several times Uppal compares athletes to children, as when she calls a bobsled team a “[s]choolyard ringleader” and “4 strong mates.” Accordingly, although for the most part Winter Sport focuses on elite competitors, it gestures toward a more egalitarian, populist conception of sport rooted in children’s play. This conception is especially prominent in poems emerging from Uppal’s attendance at the 2010 Arctic Winter Games, where, as she observes in a concluding essay, not only was entry in certain competitions limited to young people, but athletes “encouraged each other, regardless of team designation, gave each other tips, and applauded each other’s outcomes.”

As befitting a book that adduces childhood in linking athletics to poetry, at times Winter Sport manifests a conspicuous innocence about its subject. In a preface, Uppal announces that at the Olympics she consciously took up the role of a Pindaric “singer of praise,” not that of “the lamenter, the critic.” This choice means Winter Sport is shadowed by another, unwritten book of poetry about the Games, one attending to matters such as inequality, eating disorders, homophobia, and national chauvinism—issues the TV networks prefer not to address. For example, a poem dedicated to Nodar Kumaritashvili, the Georgian luger who died in a training-run crash on a challenging Olympic course to which non-Canadian athletes had been given limited access, doesn’t attend to the tricky politics of the incident. However, as Uppal celebrates “sliding” sports such as luge, skeleton, and bobsledding in the poem, she does point out that “tunnels are paths to the gods.” As she does so, she identifies a pathway that Winter Sport itself might have taken, one leading not to Olympus but to the underworld—a realm that, for all the sanitized glitz of the modern Games, still accompanies winter sport at the level of archetype. In ancient Greece, Pindar had a habit of dropping in reminders about athletes’ mortality even as he praised them. Obliquely and briefly, Uppal reminds us that modern Olympians, despite their vitality, are no less immune to death.

Indeed, as Olympic athletes brave the elements to perform their feats, they take on a strikingly symbolic role: each lap of the speed-skating oval or ski trail enacts a journey into darkness and return, an assertion of human potential in a season of waste. It is remarkable, then, that often such athletes are configured not just as champions but as childlike figures extending youthful fantasies of superhuman achievement into adult life. Uppal neatly touches on this dual role in “Super G Haiku,” where the speaker declares:

outrageous guts, I sew my own

Here the voice is at once that of an Olympian and of Uppal herself, who performed her work in Vancouver wearing a Team Canada hockey jersey with the word “Poet” on the back, and who showed guts of her own by outrageously reciting poetry at a major sporting event.