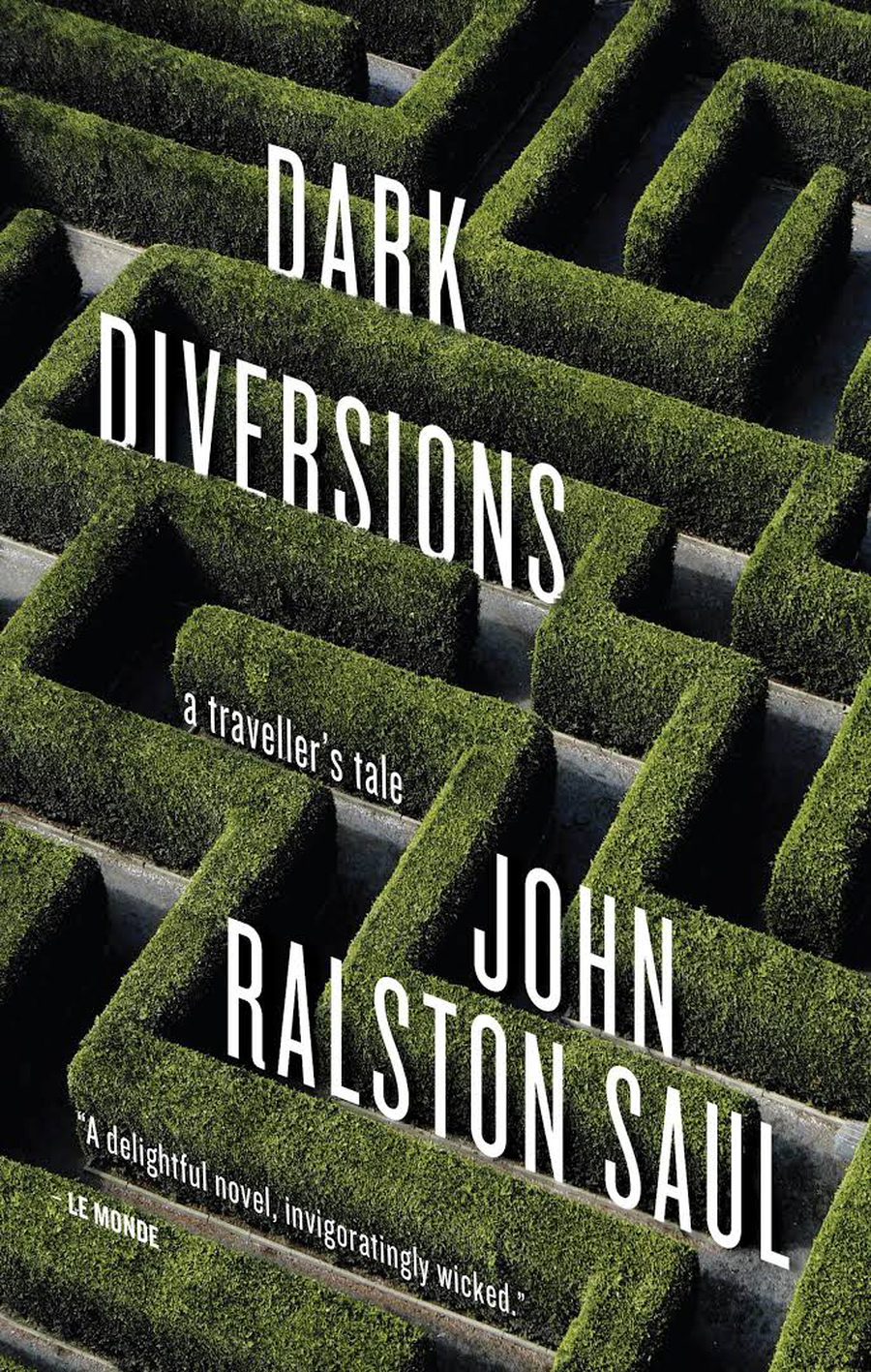 John Ralston Saul explores the banality of affluence and the tedium of the raconteur.

If some people spend their lives terrified of being bored, why are the distractions they seek out often tedious? This question is raised so provocatively by Dark Diversions that to call the book a study in boredom is not to condemn it but to identify its most interesting subject matter.

Dark Diversions features eighteen linked stories and vignettes from the adult life of its fictional narrator, a peripatetic man of letters named Thomas Bell, who has certain playful resemblances to John Ralston Saul, and whose life seems anything but boring at first blush. Bell spends much of his time among the world’s rich and powerful, from Haitian despots and murderous Arizona oilmen to octogenarian American expats in Tuscany. Some of these people cross Bell’s radar only briefly, granting him interviews or giving public lectures that he attends, while others are long-time friends, but in all cases he affects a certain detachment that lets him render critical judgements of them while ignoring the moral grey areas of his own involvement with the people. It’s only fleetingly that he considers some crucial ethical questions: not least, about whether he can intimately document others’ immorality without being complicit in it.

Meanwhile, Saul’s book is striking for its repeated implication that the wealthy are in a constant battle against boredom. Their money lets them satisfy basic desires for food, sex, and power, but Saul suggests that most lack the imagination to do anything other than pursue more of the same. Consequently, the rich men in his stories are almost all overweight, the rich women preoccupied with romance, and none of them seems too happy. Rather, their compulsion to keep life interesting leads them to intrigues ending in betrayal, violence, even murder. It is as though the ennui of affluence makes them yearn for a more primitive, invigorating world in which life is nasty, brutish, and short.

Nasty and short is also a fair characterization of many stories in this book, insofar as Bell tends to relate awful happenings with an efficiency verging on glibness. Indeed, although the stories feature various real-life figures, Bell’s tales are often too melodramatic to be taken for realist accounts. Instead, they have a kinship with medieval fabliaux, those short, broad satires written for oral performance and preoccupied with class, food, and sex. One imagines that Bell has rehearsed his stories as the dinner guest of wealthy friends, earning his crust by relieving his hosts of their boredom. His tales seem engineered expressly not to risk tedium: several have shocking twists, and more than a few end abruptly, as if Bell is worried that a denouement might test his audience’s patience.

Dinner guests may consider such tales pleasantly diverting, but at least some readers are apt to find the stories’ emphasis on incident and their thinly sketched characters a little tiresome. The scheming socialites and fatuous politicians satirized by Bell are easy targets, and they are skewered in too familiar, too tidy a manner. Bell talks of himself as having a “writer’s mind” (255), yet he’s a deeply uncurious man, repeatedly bored by others, quick to judgement, and attentive to surfaces more than depths, especially regarding women, in whom he takes little more than a sexual interest. He’s also slow to act on multiple occasions when people confess to him their desires or actual attempts to kill someone. It’s as though he’d rather write about the confessions than waste them on the police.

Bell’s sensational stories share with genre fiction an impulse to spare us from boredom by stimulating and satisfying certain conventional desires in us: for instance, to know whodunit or what happened next. Yet some readers will find Bell’s stories boring precisely because the tales’ questions and dramatic answers are formulaic, their superabundance of jolts and twists the narrative equivalent of tedious affluence. Such readers are apt to prefer stories that more actively reject convention and, by refusing to satisfy a desire for formulaic fiction, risk boring them, even set out to bore them. The boredom that such fiction risks is akin to the one observed by the psychoanalyst Adam Phillips in On Kissing, Tickling, and Being Bored; it is “waiting for something without knowing what it could be.” When literature bores us by frustrating our desire for convention, we enter one of the most intriguing states of human existence: one in which we are led to question our desires. In “A Boring Story,” Anton Chekhov writes: “Tell me what you want and I’ll tell you who you are.” Making it new in literature means altering readers’ wants—not least with regard to storytelling—and, by extension, loosening their holds on their identities, creating the potential for transformations in how they see themselves and the world.

In Dark Diversions, Bell is too loquacious to give us or himself the opportunity to experience such potential. But for all his volubility, it’s remarkable how little he willingly tells us about himself, to the extent that his penchant for storytelling seems to emerge from a terror of self-revelation. The handful of self-disclosures he does offer—e.g., “I have always been drawn by the unexpected” (255)—seems banal, illusively self-revealing, an evasion of true confession. Recognizing his distaste for writing about himself, Bell defends it as standing in contrast with “late-twentieth-century fiction, centred as so much of it is on the author himself and the outsized dimensions of his own personality, force, sins, and virility” (151). However, Saul cleverly ensures that Bell’s stories tell us things about their narrator nonetheless. And some of those things are disturbing, as when Bell witnesses the murder of a close friend, then writes a chillingly dispassionate story about it the next day.

Because Bell’s cartoonish, schematic narratives obliquely reveal his psychology in such a manner, the stories’ generic qualities aren’t boring in all respects. Rather, Saul’s title, Dark Diversions, points us toward apprehending what Bell unintentionally demonstrates throughout: namely, that storytelling can be an avoidance of dark truths the teller is unable or unwilling to confront. As the book progresses, Saul gives us a glimpse of such truths about his narrator, most provokingly in the penultimate and longest story, “A Quiet American,” in which a young Bell investigates the life of a married Londoner named Williams after seeing him in Paris with another man. When Williams takes Bell to be a blackmailer, Bell actually embraces the role for a time. The tragic consequences allow Saul to make clear the unsavoury aspects of Bell’s authorial voyeurism, even if Bell himself never fully appreciates them.

Elsewhere in Dark Diversions, the depiction of Bell’s shortcomings is subtler. Few characters really challenge him about them, and Bell has no great epiphany about how generic and self-serving his tales are. Accordingly, we’re left in the curious position of reading a book in which there’s a thorough awareness of the narrator’s limitations as a storyteller, but in which he’s always the dominant voice. If Bell is a dinner-party raconteur who both obscures and reveals himself through volubility, Saul is the host who keeps inviting him to tell more stories, indulging his logorrhoea, leaving us to make of it what we will. In literature and high society alike it’s a peculiar tactic, apt to bore some of the guests, but gripping for those who enjoy the challenge of studying tellers through their tales. By going all in on Bell, then, Saul takes a very literary risk. He asks readers who are sceptical of melodrama to find it interesting, and he asks lovers of melodrama to consider what boredom in their lives they might be hoping to palliate by seeking out such stories, as well as what tedium might lie in those same outrageous tales.