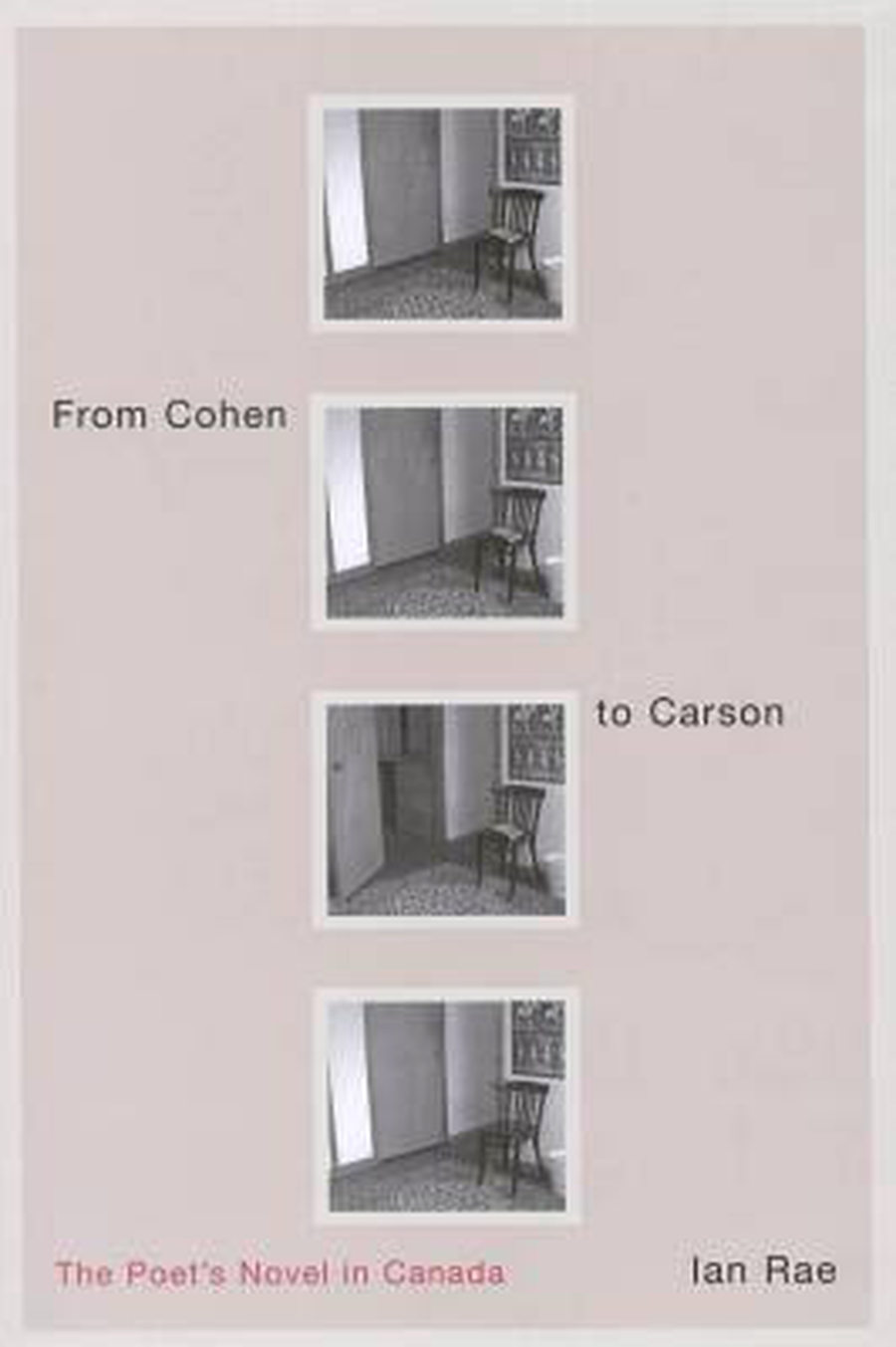 Review of Ian Rae's From Cohen to Carson: The Poet's Novel in Canada

Why have so many contemporary Canadian novelists started out as poets? Ian Rae poses this question at the outset of his book but spends little time speculating about an answer, preferring to focus not on why authors have made the shift but on how they’ve done so. As successive chapters treat Leonard Cohen, Michael Ondaatje, George Bowering, Daphne Marlatt, and Anne Carson, Rae makes it clear that those who study these writers’ fiction ignore the poetry at some peril. Tracking each author’s transition from short lyrics to long poems and thence to the novel, Rae deftly illustrates how the writers’ early preoccupations with language and narrative structure metamorphose along with changes in form, such that strategies and techniques first adopted for poetry are then productively brought to bear on fiction. Accordingly, From Cohen to Carson offers a persuasive map of continuities as well as innovations with regard to each writer’s career. However, what emerges even more strikingly is an implicit argument for a distinctive national tradition of the poet-novelist, one stretching at least as far back as A. M. Klein’s 1951 novel, The Second Scroll. Rae is careful to emphasize that his authors don’t form a ‘monolithic school,’ but he evokes amply a shared sense of artistic community and aesthetic mission.

While recognizing biographical connections between the writers, Rae’s interests are primarily formalist. He sees in his chosen authors a fascination with deconstructing varieties of narrative ‘frames,’ as well as a penchant for reiteration rather than chronological order. Rae’s readings of novels such as Cohen’s Beautiful Losers, Ondaatje’s Coming Through Slaughter, and Marlatt’s Ana Historic are sturdy pieces of criticism building upon established scholarship. The book’s highlight is a bravura reading of Carson’s Autobiography of Red, a text that in this study could have been the fly in the ointment, since the book isn’t self-evidently a novel. However, Rae argues Carson’s text into relevance through the force of his analysis, offering exegesis that is at once impressively learned, keen to locate Carson in a Canadian poetic lineage, and scrupulously devoted to close reading.

Having said that, most of Rae’s book will be compelling principally for scholars studying the respective authors to whom each chapter is devoted. The exception is the final section, which offers a robust defence of Anne Michaels’s Fugitive Pieces and Ondaatje’s The English Patient against Stephen Henighan’s now rather notorious charge in 2002 that such novels amount to little more than politically dubious purple prose. Rae takes a laudably even-handed approach in his response, identifying certain limitations of Fugitive Pieces even as he insists, pace Henighan, that these books must be understood not as shapeless products of aesthetic decadence but, rather, as participants in a growing national tradition of novels that are conspicuously self-conscious about their use of form and language. Indeed, the possibility of reading From Cohen to Carson as a rigorous refutation of Henighan’s polemic might be taken as a sign of success on the part of both critics. Henighan has proven the galvanizing value of provocation, while Rae has demonstrated that academic monographs can serve as a manner of literary Senate where sober second thought might hold the day.