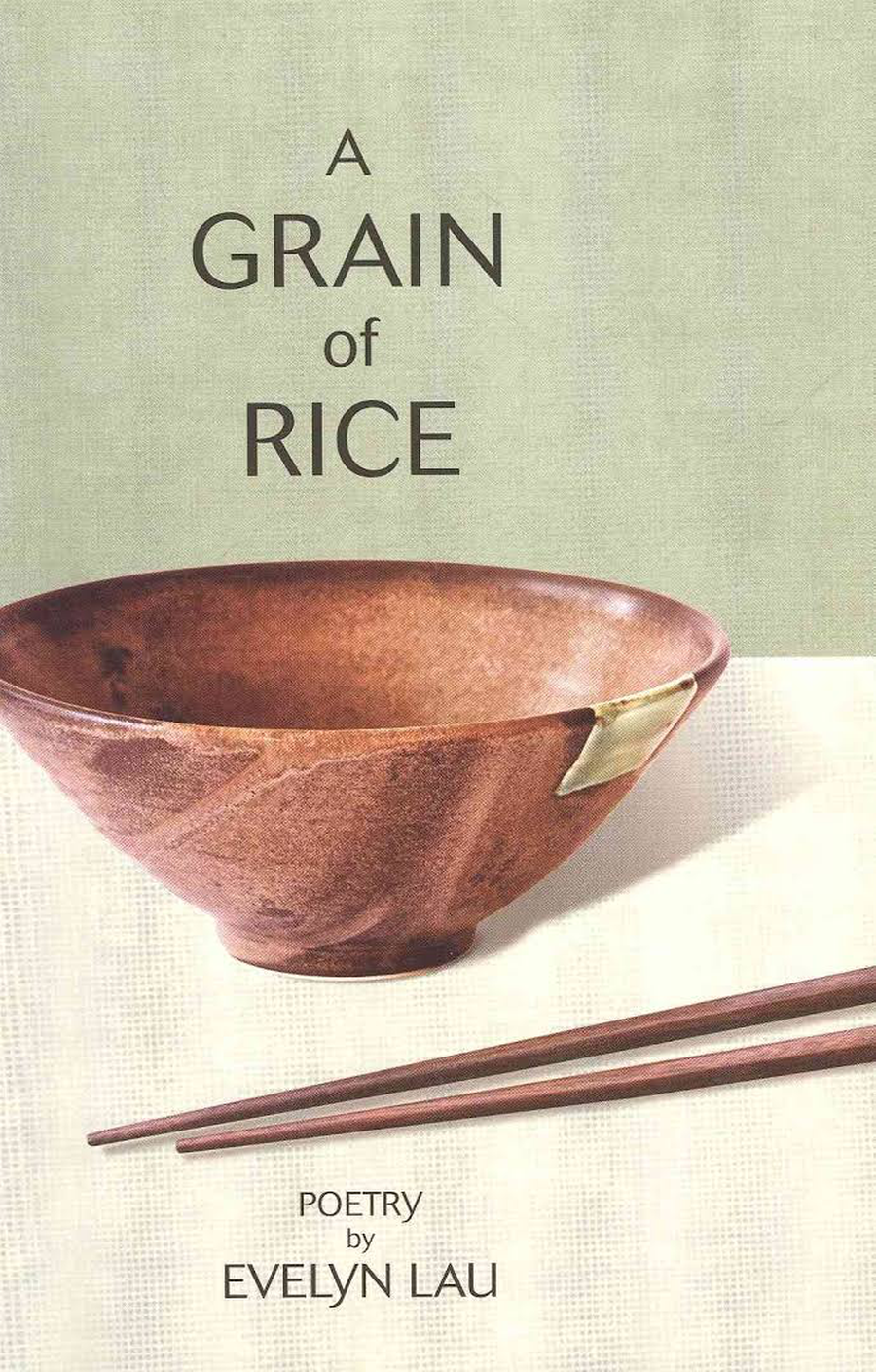 Review of Evelyn Lau's A Grain of Rice

A collection of poems about loss, Evelyn Lau’s A Grain of Rice appears to skip over the stereotypical first stage of grief, denial, to wrestle from the outset with anger and guilt—in particular, her speaker’s anger at the suffering wrought by social injustice in Lau’s hometown of Vancouver, along with the speaker’s guilt at being a member of that city’s complicit, complacent bourgeoisie. Only in later poems does it become clear that the speaker’s initial focus on injustice, for all its political heft, might also be a form of denial, a way to put off addressing directly the personal losses that she has suffered.

In this regard, one might recall that Lau’s relationship to social injustice has itself been very personal. Her debut book, Runaway: Diary of a Street Kid, emerged from her time as an indigent teenager in Vancouver. A Grain of Rice, published twenty-three years later, shows her to be still very much concerned with the city’s dispossessed. Indeed, while Lau was named Vancouver’s poet laureate in 2011, she is not the sort to write municipal encomia. Instead, she asks what it means for her and others to enjoy an affluent life on the “golden shore” of a city in which others suffer from privation. In poems such as “Fortune,” “Snow Globe City,” and “The #4 Bus,” Lau juxtaposes Vancouver’s “yummy mummies wearing Lululemon,” handling “lattes and SUV strollers,” with homeless people burning to ashes while trying to stay warm during cold snaps, and with a would-be immigrant dying in his attempt to swim from a freighter to a new life in Canada. For this man, Lau writes, Vancouver is “a dream of heaven he reached for and reached for / until the freezing waters swept his body ashore.”

Later, Lau manifests a particular antipathy to Vancouver’s Winter Olympic Games, which she depicts as an apocalyptic bacchanal. Consider her account of public celebrations in “After the Gold Medal Hockey Win, 2010 Olympics”:

Even the birds scatter in fright at this storm of noise —

flap in a cloud of cacophony.

Geese veer into the panicked sky.

The streets are bleeding

not even the dying could summon.

Figures stream out of buildings

There is a bitter irony in the simile, especially given earlier poems in A Grain of Rice that evoke the tribulations of actual refugees.

But if Lau sometimes finds her fellow city-dwellers to be virtually an alien species, she is also conscious of her own complicated privilege and the harm it has engendered, not least to herself. In the poem “A Grain of Rice,” for example, the speaker recalls being told that her mother’s family in China “shared a single / scrawny chicken on feast day”; the speaker then relates her own past struggles with an eating disorder, recalling:

Once I devoured a whole chicken in the bathtub —

tearing it apart with my hands,

Vomiting a village’s dinner into the toilet.

“A Grain of Rice” is a pivotal poem in the collection, which turns from civic impoverishments to exploring Lau’s private losses—not least, the deaths of her grandmother, of the writer Goh Poh Seng, and of Lau’s father, whom, a poem suggests, Lau saw only once in the last fifteen years of his life.

The loss that receives the most sustained attention is that of John Updike, who died in 2009 and to whom A Grain of Rice is dedicated. Updike’s writing provides Lau with the material for epigraphs throughout her collection, and she devotes a suite of poems to meditating on his work and death. If we can take the speaker of “Guanacaste Journal” to be telling the truth of Lau’s life, then she never met Updike in person, and the relationship was entirely a literary one, with Updike’s example inspiring Lau to “get it all down.” In one sense, then, the Updike poems in A Grain of Rice are a testament to the intimacy and passion of author-reader relationships. At the same time, by juxtaposing poems about Updike’s death with others about her father’s, Lau goes a certain way towards suggesting a transferential quality in her grief over the loss of the American writer.

However, Lau does not dwell on explaining her attraction to Updike in psychoanalytic terms. Instead, the Updike suite is most striking for its implicit commentary on Lau’s poetics and its relationship to her politics, as she celebrates Updike for noticing and describing the world in ways that others do not. In contrast, the early poems in A Grain of Rice condemn those who wilfully ignore the world—especially those who refuse to see the homeless and marginalized. Such is the case in “The Night Market,” as families feast on the market’s offerings while, nearby,

and clothes dripping with threads

stares at the vats of curried fish balls

and braised tripe as if at a storefront window

in Beverley Hills, her face squeezed by hunger.

In “Hospice of the North Shore, Danvers, MA,” Lau’s grieving speaker attributes to Updike the belief that “words could save a life.” That phrase may hold autobiographical force with regard to Lau, whose writing carried her off the streets and into an acclaimed career, but the phrase also suggests Lau’s political aspirations for her writing, a hope that poetry might save lives by encouraging its readers to see people differently—and, in some cases, to see them at all.

The Updike suite in A Grain of Rice is followed by another sequence in which the speaker takes to the road with a companion, as if seeking to escape her grief at her loved ones’ deaths. However, she remains pursued by their ghosts. Whether visiting Hawaiian beaches, the Arizona desert, or Las Vegas casinos, the speaker offers little by way of surprise in describing the locales. The richness of detail is, rather, in the glimpses of her own complex psychology, as when she recalls of herself and her companion:

and for a moment I wished

it had been a person instead, drowned

and swept away by the current, even someone

I knew but liked only a little, not like

I loved those glasses.

Lau’s observation here—namely, that a person grieving a loved one might register a further loss, even a trivial one, in an enormously outsized manner—is bracing in its lack of sentiment. If the speaker seems at once a less fully feeling human being and a more grossly feeling one than we might expect, that is precisely the point. We are encouraged to recognize grief both as a form of diminishment and as involving distortive amplifications of feeling.

The travel sequence of A Grain of Rice begins with the speaker seemingly overwhelmed by her sense of loss. In “Guanacaste Journal,” she actively avoids TV broadcasts of earthquake-caused devastation in Haiti, asserting of herself and her companion: “we have our own grief. / What would we do with someone else’s, / where would we carry it on our bodies?” But her poet’s obligation to notice does not allow her to ignore others’ suffering entirely. Seeking refuge in the swim-up bar at her resort, for instance, she finds the pool’s paradisal veneer falling away as she watches a wasp that “paddles frantically / on the chemical surface, unimpressed / by this blue heaven.” She also finds herself considering the “vats and cornucopias and platters of food” at the resort in relation to daily fact of hunger for the world’s less privileged . Lau suggests that for her speaker, at least, such an engagement with global realities is not only politically essential but also psychologically valuable, drawing her out of the self-absorption with which grief oppresses her.

The last section of Lau’s book, “Fear of Flying,” returns the speaker to British Columbia, where she realizes of an unnamed, deceased auditor—perhaps Updike, perhaps her father—that she “hadn’t thought of you in days. Weeks.” Ambivalent about this discovery, she declares: “So this is how life goes on, heartlessly, / abandoning its dead like clothes gone out of fashion.” While such a declaration is conventional enough in elegies, the use of simile is notable, insofar as the figure is pervasive in A Grain of Rice, especially in the final section. For instance, all but three of the twelve poems in the section feature a simile in their opening lines, and six of them end with one. Lau’s reliance on the figure might seem to be a stylistic tic, but it is also evidently a performative element in her work. By so conspicuously and repeatedly identifying affinities between things, Lau is not only undertaking a key, traditional poetic labour; she is also both pointing to and rehearsing the process of mourning, a process whereby—at least according to Freud’s notion of “recathexis”—a recognition of similarities between the departed and who or what remains allows the mourner to create new, substitutive attachments.

For all of Lau’s successes in dramatizing and reflecting on the experience of loss, and for all of her worthy attention to those people whom the wealthy West has neglected, A Grain of Rice is groundbreaking less as a work of mourning or as a plea for social justice than as a volume recognizing the connections between personal loss and collective impoverishments. The early poems in the book gain emotional complexity once we recognize that the speaker’s political outrage is fuelled in part by her grief; later, the power of the poems devoted to mourning emerges not least from the speaker’s struggle to understand her suffering in relation to global crises and inequality. If Lau’s speaker seems to wonder how one person’s sorrow can be significant in the face of millions’, A Grain of Rice suggests that one can fully apprehend the meaning of millions’ suffering only when one also apprehends the profundity of each individual’s pain.