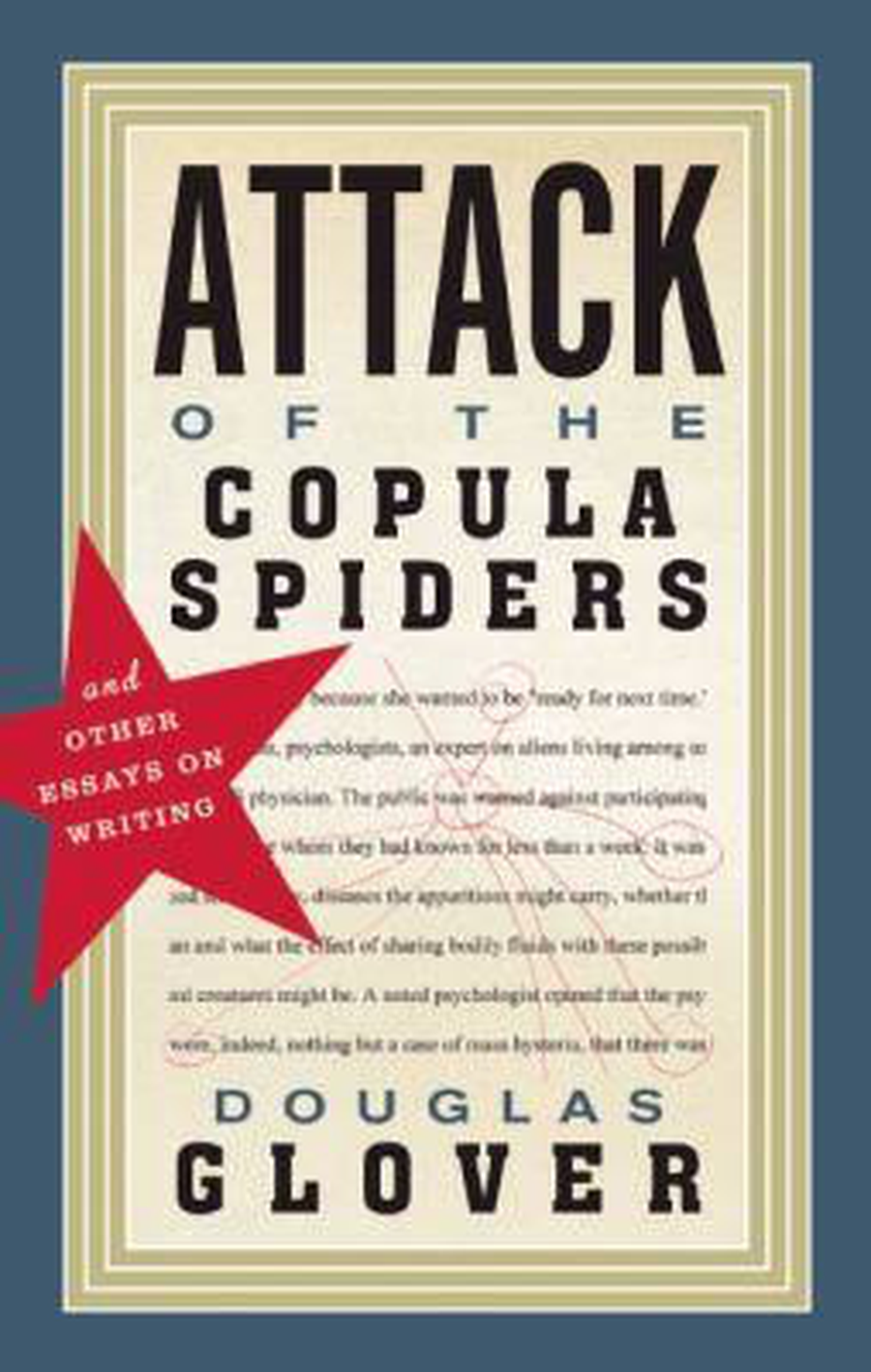 Review of Douglas Glover's Attack of the Copula Spiders

Douglas Glover. Attack of the Copula Spiders: And Other Essays on Writing Biblioasis. $19.95

Attack of the Copula Spiders is a book preoccupied by connections—in particular, by fiction’s establishment of oblique but fruitful ones between apparently disparate phenomena. Douglas Glover has made similar connections himself in this volume by collecting a diverse yet coherent set of essays: instructional expositions on creative writing, analyses of contemporary fiction, and meditations on the functions of literature.

Throughout, Glover shows a special sensitivity to structure, whether involving whole novels or single sentences. The latter are at issue when it comes to the ‘copula spiders’ of Glover’s title—his term for the annotations he makes to identify his Creative Writing students’ overuse of the verb ‘to be’ in their stories. Glover wants writers to use livelier action words, instead. To cite an example that he gives: ‘“The barn WAS red” should become something like “Ancient red paint peeled off the barn boards leaving them patchy and leprous-looking.”’

The early essays in Glover’s book are distinguished by such attention to the nuts and bolts of writing sentences. For instance, he helpfully discusses what he calls ‘but-constructions’—constructions in which ‘one proposition is followed by another that is a contrast, contrary, antithesis or somehow runs counter to expectations. The two propositions pivot on a ‘but’ or implied ‘but.’ The effect is the creation of conflict at the level of a sentence (or paragraph).’ In the excellent essay ‘The Mind of Alice Munro,’ Glover identifies how pervasively and effectively Munro deploys such constructions. To be sure, the insertion of ‘but’ into a paragraph for the sake of creating conflict might seem like a cheap trick, especially once one recognizes it as a device, but in analysing Munro’s fiction, Glover shows how a writer’s syntactical choices can modulate the device while adding depth and complexity to the conflicts in play.

Glover encourages writers to craft plots that feature similarly modulated stages of conflict. Too many beginners, he observes, write only a ‘partial story’ that ends prematurely after its first major scene. Likewise, he identifies the ‘broken-back story’ as one that fails by swapping out its central conflict for another rather than developing it, while the ‘bathtub story’ is so called because it features a protagonist who, figuratively speaking, just sits around. A good writer can make physical or psychological stasis compelling, but Glover insists that inertia in terms of dramatic development is a disaster.

If a few of Glover’s observations sound familiar—for instance, when he notes that characters are defined by their desires—they’re sufficiently important to bear repeating. What’s more, he inevitably supplements such observations with more provocative insights. To wit: ‘In stories, character is perversion; what a character wants is often a fetish, an object that bears some metonymic or synecdochic or associative relationship to what he really desires.’ And when Glover offers straight-out writing tips, they tend to be very good ones: for instance, he suggests that if a story being written ‘seems to resist moving forward,’ the author should ‘reach back into the earlier text of the story, find something to bring in again and proceed from there.’

Meanwhile, Glover’s advocacy of fiction featuring dextrous variation in terms of syntax and plot is explicitly motivated not only by his concern about a ‘post-literate’ culture characterized by poor grammar skills and verbal laziness but also by a worry about the prevalence of stories that evince an ideological and aesthetic conservatism by clinging to the norms of what Glover calls ‘market-based sentimental realism.’

In contrast, in a concluding essay that connects texts as diverse as Don Quixote, Rosemary’s Baby, Alien, and The French Lieutenant’s Woman, Glover notes a pattern in these stories of ‘a discourse of normality’ being ‘smashed by the eruption of an alien force.’ For Glover, this pattern echoes a crucial social function of fiction: namely, to bring readers into contact with the ineffable, the noumenal, ‘the thing we cannot talk about but which insists on its presence nonetheless.’ By engaging with such matter, Glover implies, the best fiction brings readers to the limits of what can be said and perceived, thereby prompting reconsiderations of matters no less weighty than that of what constitutes reality. This is vexed, essential terrain, and it is a virtue of Glover’s book that it identifies fiction’s connections to such territory in terms of both the syntactic and the architectonic levels at which literature operates.