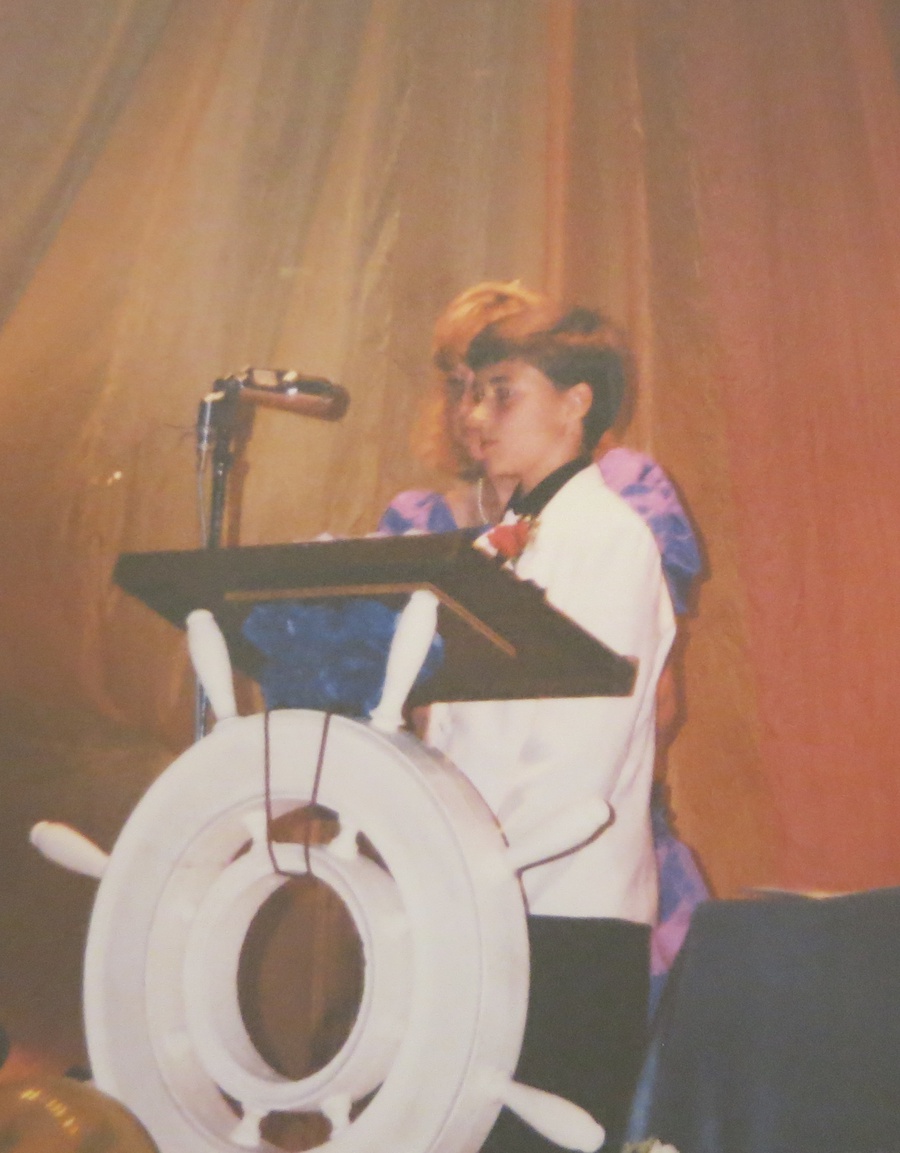 Speech to the Graduates of Peninsula Shores District School

Earlier this summer, I had the privilege of giving the grade-eight commencement address at Peninsula Shores District School in Wiarton, Ontario, the town in which I was born and raised. Here are the remarks I offered on the night.

This is actually my second grade-eight graduation speech in Wiarton. The first one was twenty-six years ago. It was the night of my graduation from Wiarton Public School. Here’s a picture of me from that evening. Looking at it, you may think, “Wow, I didn’t know that white jackets were fashionable in 1990.” They weren’t. But I felt like wearing a white jacket, and my level of fashion awareness was very low.

That night, I gave a speech together with my friend Daena, because the two of us were the valedictorians. Here’s a photograph of us on stage. My memory of the evening’s a little hazy, so I can’t tell you why, exactly, the lectern was made out of a shipwreck. But I can tell you that as Daena and I gave our speech, we took turns saying the lines.

Now, at one point in our address, Daena started to cry. Totally understandable; it was a big emotional evening. We’d spent nine years with the same group of teachers, the same friends, learning together, growing up together, and now many of us were heading off to different high schools in different places.

So Daena started to cry after finishing a sentence, and I turned to her, and she and I whispered back and forth, and then I continued speaking to the crowd. And there was a unanimous sigh as everyone thought how nice it was that I was filling in Daena’s lines while she collected herself.

That’s not exactly what happened, though. Because when Daena started to cry, it was actually my turn to speak. But I’d forgotten my lines, and so Daena, as she was crying, starting whispering them to me. She could do this because we’d collaborated so closely that we knew each other’s words, with the consequence that even as she was feeling intensely in that moment on stage, she was still aware of what was going on for me.

Well, that was a long time ago. But I thought about the speech recently while on a run in the conservation area near my home. There are miles and miles of woods there, and I was running through them in my little red running shorts on a very hot day, far from anywhere, following the bottom of a deep valley, when I came to a narrow wooden footbridge, not more than ten feet long, three feet across, that went over a stream.

Standing right in the middle of that footbridge was a person. She had her back to me, but I could see the side of her face and a few things about her. First, I could see she was in her seventies. Second, she was wearing a Rihanna T-shirt. Third, she was dancing the nae-nae. And she was doing the nae-nae right in the middle of this very narrow footbridge that I needed to get across.

I called out, “Hello.” She didn’t respond. She just kept nae-naeing with her back to me.

Now, by this point in my run, I was pretty hungry and ready for lunch. So I didn’t think, “How strange and wonderful that there’s a woman in her seventies nae-naing on the bridge.” What I thought was, “This person is keeping me from food.”

So I ran right to the edge of that bridge, and I said, very loudly, “I’m just going to sneak by you.”

She still didn’t turn around. She kept nae-naeing. She even started to whip a little.

But I did not say this. Instead I looked around. And you know what? I took in the trees, I heard the water in the stream, the birds singing, and I realized maybe I was wrong. Maybe this bridge wasn’t here only to help me get from A to B. Because all of a sudden, I realized there was possibly no better place on earth to nae-nae, no better spot for it than that bridge, in that forest, in that moment in time.

And I wanted to say to the woman: “Thank you. Thank you for reminding me that it’s not all about getting yourself to your destination, that life’s more meaningful when you open yourself up to what other people are doing, to their differences, to their willingness to try out new ways of being themselves.”

Then the woman took out the headphones she was wearing. And she turned around, and she saw me, and she screamed.

And I thought, “Now come on. There’s no reason to scream. I am just a middle-aged man, standing here alone in the forest, wearing his little red running shorts and watching a woman dance.”

Then I looked down and remembered that, because it was a very hot day, I wasn’t wearing a shirt. And you know, I started to see things from her perspective.

When I was in high school, maybe the scariest thing was that I didn’t always know who I was.

Before adolescence, you think you’re Red Riding Hood. Then the hormones hit, and everything makes you growl.

When I was a teenager, I became so self-conscious about the fact that I didn’t really know who I was, or who I was becoming, that sometimes I just wanted to hurry across the bridge that was high school and get out as fast as I could. And sometimes I didn’t want to face people along the way: not my teachers, not my parents, not my friends. I didn’t want to feel them looking at me, because it made me too conscious of all the ways in which I didn’t know who I was. And so I often didn’t bother to find out who they were, either.

And sometimes I didn’t bother to try new things or learn new things, because learning new things meant opening up even more possibilities in terms of who I might be.

High school is a bridge, and it’s an exciting bridge. It’s a bridge taking you to university or college or a career, and so it’s a time to take seriously. It’s a time to start thinking about where that bridge might lead you. But it’s also a dance floor -- a dance floor where you get to experiment with new moves.

I hope that in high school, you’ll try out clubs, sports, courses that lead you in new directions. I hope you’ll take the risk of introducing yourselves to new people and being open to what you can learn from each other. I hope you’ll keep asking yourselves: “What kind of person do I want to be? What sort of things might I be passionate about doing?”

I hope you’ll be supportive of your friends and family when they try out new things and new ways of being themselves, too, even though it can be disconcerting when somebody you love leaves behind their familiar habits of speaking and acting.

And I hope that you’ll embrace the support of the people who very much want to be there helping you: your family, your teachers, your friends. These are people who are proud of you, proud of who you’ve already become. They’re also excited to see who you turn out to be.