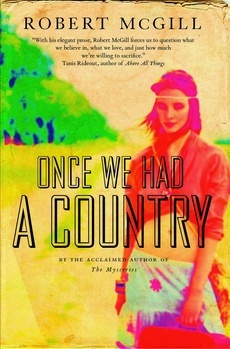 Once We Had a Country: Deleted Scene #2 — The Freighter

This scene was a favourite but had to be cut because it was too divorced from the plot.

The next day, in the swelter of the afternoon, Fletcher gets fed up with painting and decides they should all drive down to see Niagara Falls. Maggie doesn’t know why he’s one who gets to say when they can stop work to have fun, but the heat in the farmhouse has turned her brain to bouillabaisse, so she doesn’t complain.

Things aren’t much better in the station wagon, after Brid hands the keys to Fletcher and claims the passenger seat for herself, telling Maggie to play Mommy for a while in the back. Pauline seems no happier than Maggie with this arrangement. She fidgets in her safety seat with her curly-haired doll and calls for her mother, while Brid and Fletcher talk to each other up front, Brid’s thin, freckled arm reaching out to lay a hand on Fletcher’s headrest, her bracelets clinking together like ice in a glass.

She’s taller than I am, thinks Maggie. They’d be a better match. He wouldn’t have to stoop to kiss her. The image of them holding each other, lips against lips, is one she hurries to exile from her mind. For a split second, though, she has a clear vision of herself without him. She tries to dilute it by taking in the fields and copses as they pass, while the sun beats down and the car grows hotter than the house.

Then a strange sight arises in the distance. It’s an ocean freighter, and it’s sailing through a peach orchard. With a gleaming black flank it glides across the horizon, its wheelhouse towering above the treetops, twin smokestacks streaming fillets of exhaust, its bottom half obscured by foliage. The leaves on the trees don’t stir as the vessel passes, and it doesn’t make a sound, even though it must be two hundred yards long. Impossible, she thinks. It’s sunstroke. But now Fletcher’s pointing it out to Brid, and Pauline’s straining to see it, too, this hulk of a ship slowly crossing the green earth.

A moment later, they reach the Welland Canal. From the middle of the lift-bridge, she watches the freighter plowing waves, reduced to an ordinary vessel. Fletcher steers the station wagon onto a road that parallels the waterway, and soon enough they’re pulling even with the ship, overtaking it, Fletcher narrating the chase like a race-track announcer while Brid and Pauline cheer him on. Ahead, at a place where the canal narrows into a massive lock, the road reaches a viewing platform upon which a few dozen people have already gathered to witness the freighter’s passage. After Fletcher parks the car, the four of them rush to join the spectators, Maggie turning back momentarily to grab the camera bag from the trunk.

With the advantage of the platform’s height, leaning over the rail toward the lock, she’s able to look down upon the ship as it approaches. The deck is slatted by rectangular hatches running down the middle like enormous vertebrae. The lock lies empty and seemingly bottomless, with concrete walls that have been stained by water lines and gouged by countless nosing vessels. As the freighter enters, those assembled express some doubt about whether it will fit, but the lock swallows it whole, so deeply that only the ship’s antenna mast can be seen, a jutting metal cross festooned with guide-wires. Two black gates close behind the vessel, and it begins to rise. Maggie films the proceedings, catching the first hint of the dark hull as it becomes exposed, the heads and then the bodies of the sailors on deck, who wave for the camera, at first in the viewing platform’s shadow but soon backed by tufted clouds. No matter where she stands, there’s too much of the ship for her to capture all at once. Her attempts to squeeze everything in through angles and panning feel vain, unseemly.

No one else shows any sign of appreciating the thing’s enormity. People are eating donuts, posing for photographs, Fletcher’s swinging Pauline in circles, and Brid blows kisses at a bearded sailor, even while ever more of the vessel is revealed. They act like they’re at a penny carnival, when what Maggie feels is that the ship will never stop rising, it will keep on until nothing is hidden, even its dripping keel suspended in the air. There’s almost a shamefulness in it, as though until now the thing has had a private life. But soon enough the lock stops filling, another set of gates opens, and the vessel continues on its journey. When she lowers the camera, she finds the others have already started back to the car, Fletcher with Pauline on his shoulders.

In the station wagon they drive until they reach Lake Erie, then continue east along the shore. The blue expanse of water is tantalizing in the heat, but Fletcher insists they not stop again until they reach Niagara Falls. By the time they get there, the lots are overflowing with weekend tourists and there isn’t a single place to park. He becomes so frustrated that in the end the only view they have of the falls is a momentary glimpse looking back from the road. Maggie films what she can through the car window—a whiff of mist and, ever so briefly, an abyss of tumbling foam.

Her back feels like it’s glued by sweat to the upholstery. Pauline sits there looking miserable, too, clutching her doll, then throwing it to the floor. Maggie retrieves it for her; the thing has a sour-milk smell. Pauline holds it straight out and shakes it violently.

“Bad Buddy!” she exclaims, smacking the doll’s head with an open hand. Maggie glances over to Brid, who shrugs and grins.

“Better Buddy than me,” she says. Turning to Fletcher, she adds in a stage whisper, “At least she isn’t repressing it like some people.”

By the time they arrive at the farm, she feels baked and drowsy. Pauline has fallen asleep in her safety seat, and Brid sits slumped against the car window, her head back and mouth open, her eyes scrunched tight as though in pain. Fletcher turns to Maggie and smiles, putting a finger to his lips. Carefully the two of them ease their way out of the station wagon, trying not to make a sound. Before they can get away, though, Brid sputters back into consciousness, rouses Pauline from her slumber, and the four of them go up into the house together.