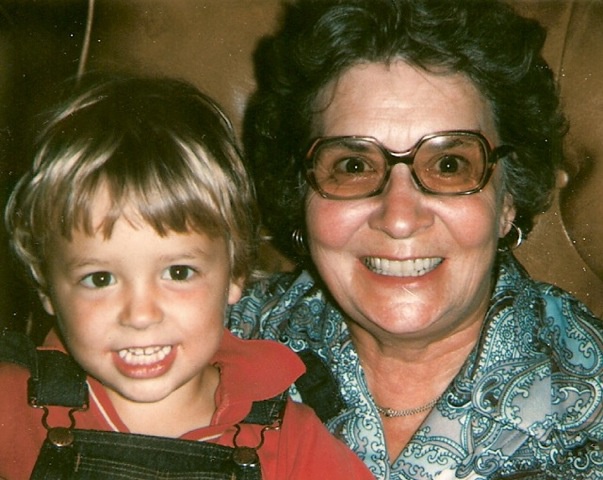 My grandmother Lena would have been 99 years old today. To mark the occasion, I'm posting a short essay about her that was broadcast on CBC Radio a few years ago.

One day when my grandmother Lena was in her early seventies, living alone in a cottage on the Bruce Peninsula in Ontario, she began to feel dizzy. After she lay down, before she passed out, she looked toward the ceiling and saw herself in a green dress, floating above the bed. When she woke up, she discovered that her hand had curled into a claw, and only by staring at each finger in turn did she manage to straighten it. Over the following months, occasionally Lena found herself unable to do certain things she’d always done, like unscrew bottle tops, turn on taps. Each time she had to relearn the task through patience and willpower.

It must have been a stroke, but there was no immediate diagnosis because, independent woman that my grandmother is, she didn’t tell anyone what had happened, at least not until a decade later, when she set down the memory in a story. Now, almost ninety, she’s been writing episodes from her life for eleven years, and each time she finishes one, she sends it to my mother, who types it into a word processor and then passes it on to Lena’s other children, her grandchildren, and her great-grandchildren.

In this way, we’ve come to know my grandmother’s life: how she was raised on the family farm in southwestern Ontario; how her father, who’d inherited the place with no agricultural background, learned what to do by watching the neighbours through binoculars; how Lena’s mother told her children earnestly that they’d go blind if they wore their rubber boots too much; how my grandmother was the best runner at her school, which earned her the lifelong nickname “Leaping Lena.”

This year, with my grandmother about to turn ninety, my mother decided to collect Lena’s writings into a book for family members, and I volunteered to be the copy editor.

The book was supposed to be a birthday surprise for Lena, but when I first examined the manuscript my mother had compiled, I realized that the surprise was on us. No longer did I wonder how I’d become a novelist. Here was the blood connection spelled out in my grandmother’s words, in her riveting descriptions of the family’s blind horse, Duke, who would start and stop at her brother’s whistle, or of the time that her young son screamed for her from his bedroom, having mistaken a splinter in his arm for a black worm as it worked its way up through his skin. When she came running and saw it, Lena writes, her first thought was that she had to pull it out before it slithered back in.

Reading Lena’s manuscript, I felt transformed, like my grandmother after her stroke. In my case, it was Lena’s writing that had stricken me, and it was my grandmother whom I was having to relearn.

As I copy-edited the book, I was glad to find there wasn’t much to change. When I remarked upon this to my mother, she pointed out that with Lena’s blessing, she herself had gone along and edited as she typed. In my grandmother’s stories, I’d often seen affinities between Lena and my mother—their independence, their tenacity, their athleticism—but I hadn’t considered that my mother, a physical education teacher, might be more literary than I’d thought. All the time I’d been reading Lena’s stories, my mother’s voice had been echoing in there, too.

And so it was my mother and I together who decided on a title for my grandmother’s surprise book: it would be called A Life in Stories.

I knew that not every story of Lena’s life was in the book, though. For one thing, I knew she’d never brought herself to write about my grandfather’s death in his fifties, from complications of diabetes. Only in a private conversation had she told me that story, on the day, six years ago, when I broke the news that I’d just been diagnosed with diabetes, too. It was a hard conversation for both of us. Afterwards, I felt I’d been told something difficult but important, something my grandmother wanted to talk about but would never be able to write down, and I vowed to set it on paper myself. The narrative of my grandfather’s diabetes was a worm that had crept out of her, and I decided that I couldn’t let it slip back in.

The short story I wrote as a result wasn’t about my grandfather, exactly, but its debts were clear enough. Lena cried when she read it, and I worried that she was angry, but she said she was only upset by the way in which the story brought back memories. She was amazed, too, that I’d remembered so much of what she’d told me. I shook my head. How could she, who’d written so much about a childhood eighty years gone, not think that she’d passed on some of her prodigious memory to her grandchildren?

After collaborating on Lena’s book, it’s tempting to feel that I’ve joined a line of storytellers—my grandmother, my mother—and that the stories we tell are shared ones, with no single owner. But these are stories of our intimate lives, with all their secrets and painful moments, and it’s a struggle to balance the need for self-expression against the desire for privacy. For my grandmother, the result has been that even for all the magnificent details in her book, Lena’s Life in Stories will always carry with it an unwritten life of untold tales. As for me, I’m still trying to decide what shouldn’t be written and what must be written. Whatever my choices, I hope that our mutual desire to remember and to record will bind Leaping Lena and me together in a way that exceeds mere genealogical connection.