War Is Here: The Vietnam War and Canadian Literature

Canada did not fight in the Vietnam War, but the conflict seized the Canadian imagination with an energy that has persisted. In War Is Here, Robert McGill explains how the war contributed to a golden age for writing in Canada. As authors addressed the conflict, they helped to construct an enduring myth of Canada as liberal, hospitable, and humanitarian. For many writers, the war was one that Canadians could and should fight against, if not in person, then on the page.

In this pioneering account of war-related Canadian literature, McGill observes how celebrated books of the era channel Vietnam, sometimes in subtle but pervasive ways. He examines authors’ attempts to educate their readers about American imperialism and Canadian complicity, and he discusses how writers repeatedly used language evoking militarism and violence – from the figure of the United States as a rapist to the notion of Canada as a “peaceable kingdom” – in order to make Canadians feel more intensely about their country. McGill also addresses the recent spate of prize-winning Canadian novels about the war that have renewed Vietnam’s resonance in the wake of twenty-first-century conflicts involving America.

War Is Here vividly revisits a galvanizing time in world history and Canadian life, offering vital insights into the Vietnam War’s influence on how people think about Canada, its place in the world, and the power of the written word to make a difference.

Read an excerpt from the book here, and read a related anthology at canlitofthevietnamwar.com. 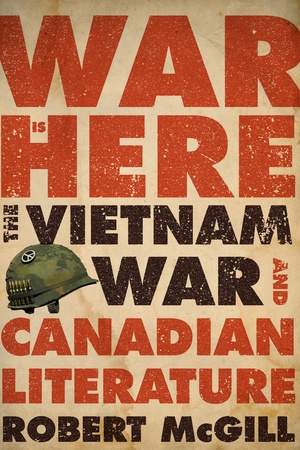 "A compelling argument for the importance of the Vietnam War to Canadian literature’s depictions of Canadian identity."

"McGill’s argument is a compelling and crucial one, as it outlines in clearly written detail how war impacts a country and how those ideological traces appear in literary texts."

"A crucial primer . . . on how Canadians have historically reacted to crises linked to American militarism and racism."

"A scholarly but accessible exploration of the effect of the Vietnam War on Canadian writers, and how that conflict is embedded in our sense of Canada as a positive alternative to America."